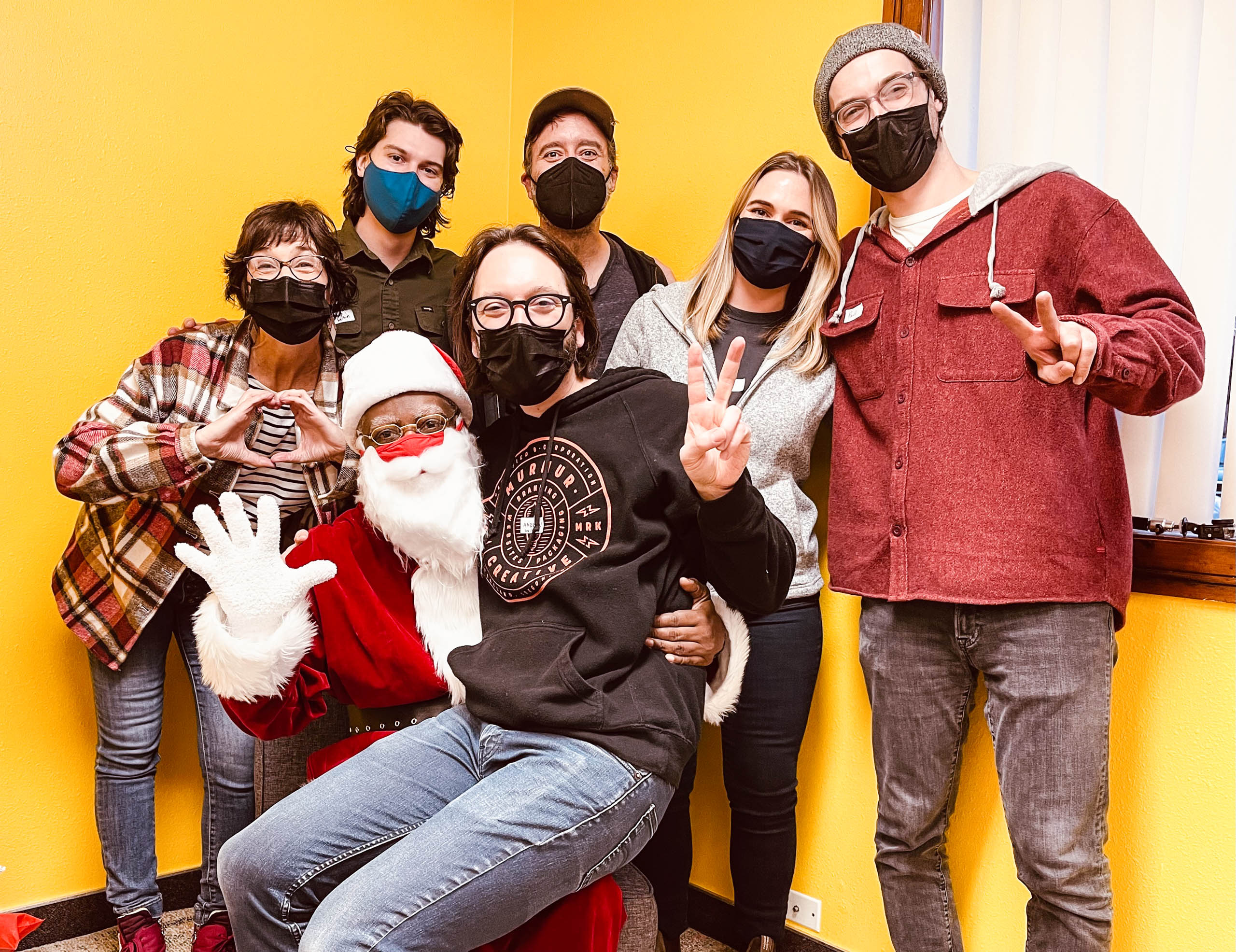 As we wrap up 2021, I feel like it’s been a hard year in a series of hard years. But as difficult as things may seem here at Murmur, it’s been a lot harder for others. I feel like this knowledge has been ever-present–a weight many of us lug throughout the day. Because with each inconvenience and hard decision we make during the pandemic, there are others dealing with things far worse and making harder decisions. It’s difficult not to feel helpless in the enormity of suffering–especially when it takes so much time and energy to manage our own lives. But as it turns out, somewhat unsurprisingly, making even a small effort towards alleviating that suffering for others is a balm for the spirit.

We’ve made some new friends at Murmur over the course of the last few years. One of those new friends is Brown Hope. Founded by Cameron Whitten, Brown Hope is a Portland-based non-profit that aims to fight racism through healing initiatives. One of the unique things about Brown Hope is that they don’t waste time trying to qualify who needs help and who doesn’t. They just give. This eliminates many of the hurdles that people-in-need have difficulty navigating. We chose Brown Hope as the recipient of a $20,000 grant in Murmur services in 2021 and are currently working with them to create a new logo and website. 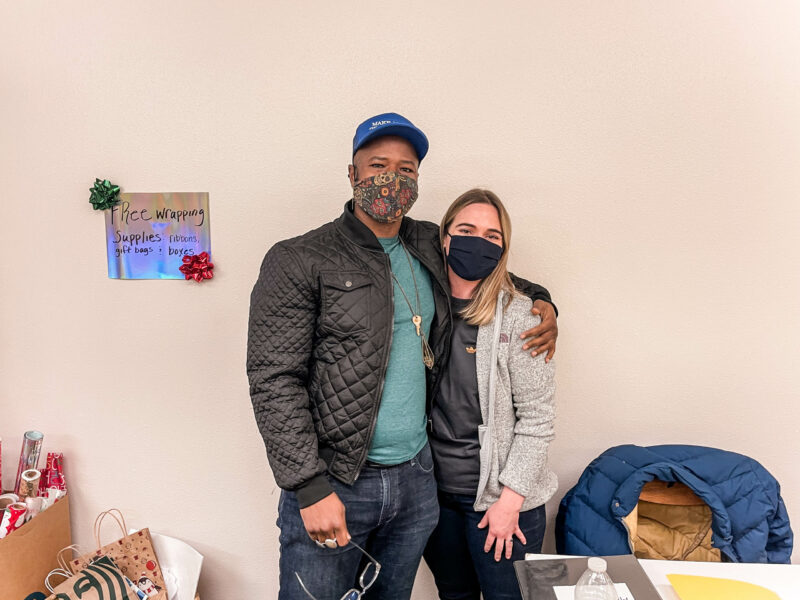 It was this partnership that inspired a group of us Murmurites to volunteer during the holiday season. I’m not sure any of us knew what to expect. Would we be doing deliveries? Or answering phones? Digging ditches? We arrived at 10 am in the morning like a gaggle of kids on the first day of school: 6 of us in all.

Following the instructions taped to the entrance, we banged tentatively on the bay doors (this thundering sound became a regular occurrence throughout our day as volunteers and community members arrived). We were greeted and ushered into the middle of a warehouse.

Tables were piled high with donations. It was like a Santa’s Workshop full of toys, books, and games. The toy tables were labeled by age group: 0-3, 4-8, 9-16. Shelves in the back were stocked with baby clothes, diapers, hygiene products, snacks, water bottles, and more. All the things families need to survive. 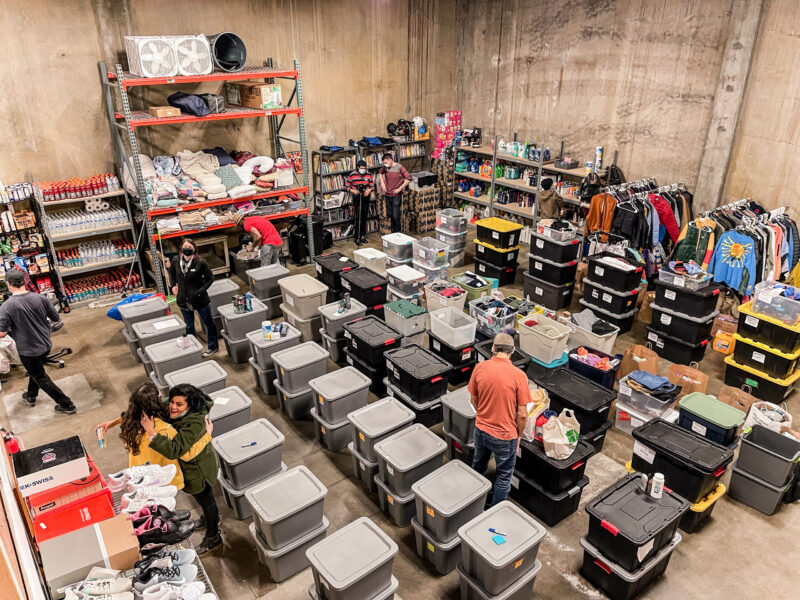 O’Nesha, Brown Hope’s Solidarity Squad Coordinator, introduced herself briskly and called us to attention. She was all business and we hung on her every word. There was a system and we needed to learn it. She had no problem projecting her voice across the warehouse so everyone and anyone could hear. She led us from station to station, showing us how we would all be working (what a job she has to manage volunteers! Coming in every day to manage untested employees who have absolutely no idea what they are doing).

But I was not dissuaded. We could do this. We were adult professionals. (I did vaguely wonder if it was ok to take notes. There were a lot of things to remember!) Luckily it became simpler when we were assigned roles.

There were a few duties handed out that I wanted to avoid. Not being socially adventurous, I was relieved not to be assigned as a “greeter” or even a “runner.” I felt like I’d be more successful gathering and packing (which is what I ended up doing).

We were handed packing sheets and each one was for a different family. My first sheet listed a mother’s name and her children: boy 5, boy 9, and a girl 11. I had to pick two toys for each child, throw in some stocking stuffers, a blanket, socks, some hygiene products, laundry soap, and bundle them all together for when the family came to pick them up later in the day. Simple enough, but being ADD I knew I would need to take extra care in ensuring all the items were accounted for.

This was some serious decision-making! Choosing Christmas toys for children? For one of the most exciting days of the year? My 7-year-old created his Christmas list in October and has been asking about it every day since. These kids might not be expecting much, but what they do get is going to be picked by me, from this table of donations. That’s some serious responsibility.

Luckily, I didn’t have much time to dwell on each decision. O’Nesha needed to keep the ship moving and the rowers rowing. She really was a force of nature and conducted us like an orchestra of slightly bewildered players. We rushed from one task to the next–because the families were coming! They needed their packages and we had to keep them moving. 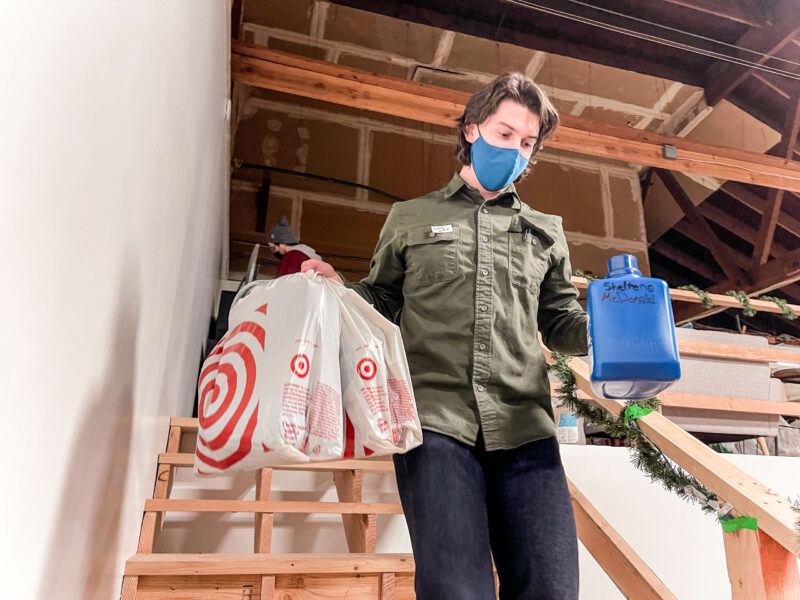 While we worked in the warehouse the lobby was prepared for guests and Black Santa Claus arrived (Cool article by NPR by-the-way: Black Santas are helping to change holiday icons and add more representation).

As mothers and children arrived, they took pictures with Santa as their names were run to the warehouse so we could gather their orders.

We worked for about 6 hours until our backs were stiff and our armpits smelly. I took a 10 min break with a water bottle at one point and admittedly felt a little guilty. There was important work to be done!

It was fun though, not hard. It was exciting to do something different with my coworkers and solve different kinds of problems. Instead of discussing the merits of a hover-state of a button on a website, I was asking my co-worker “Where do the size 3t winter jackets live?” or “Do you think a 7-year-old girl would like this under the Christmas tree?”

I hope I don’t come across as self-congratulatory. This was a very small thing that I/we did. An everyday thing. It’s people like O’Nesha who deserve the praise. And I know her work-family knows this because we were all secretly given a rose to present to her at the end of the day. Really, I’m just grateful to have had the experience. I’m grateful that organizations like Brown Hope are looking out for families that are struggling. It takes guts to take on the suffering of others!

And if you, dear reader, feel like taking some time to do some good. Please consider signing up for a volunteer day with Brown Hope here. 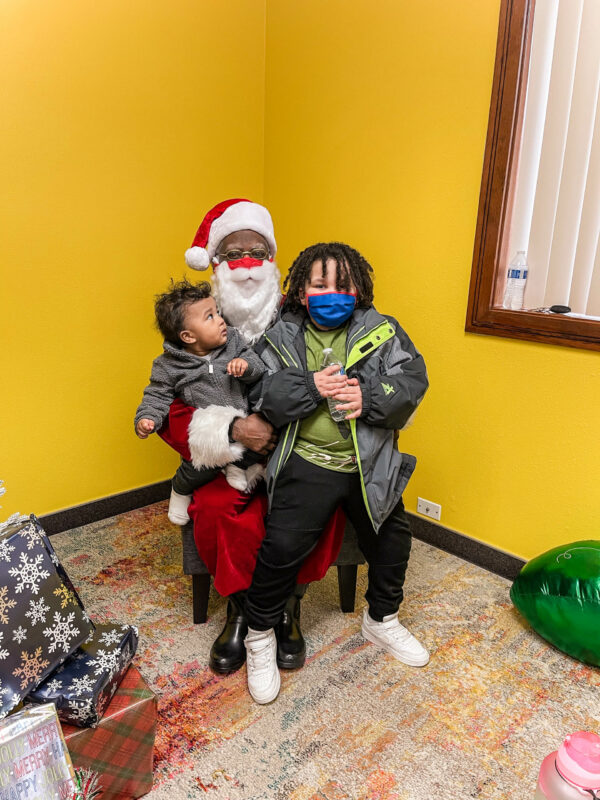